#EdTechBridge: What an Opening Night!

Principals, an Associate Professor, a group of educators, Technology and Tech Integration Specialists, a Digital Curriculum Editor, EdTech company Presidents/VPs, Founders and Serial Entrepreneurs, Directors of Educator Experience, Creative Directors and Social Media Manager. What does the group above all have in common? No, its not the start of some random education joke.

This is the diverse list of participants at the inaugural #EdTechBridge chat on Wednesday. The aim of this chat is to bring educators and EdTech developers / entrepreneurs together to collaborate to co-create better EdTech to meet the needs of our most important consumer, our students.

The diverse mix of this group is fantastic news for myself and co-moderator Katya Hott as we were not sure who was going to turn up... if anyone! As it turns out not only was it a good mix, but everyone also mixed well together. 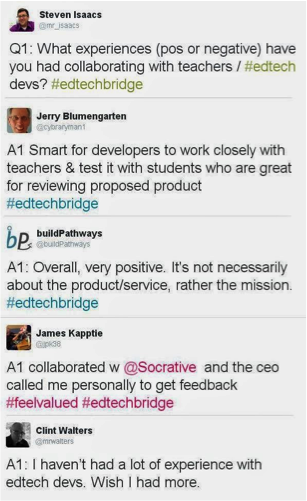 Among my favorite job titles that individuals had who participated in the session were "Playful Storyteller" Hanna Clemmons, "Chief Geek" Aisha Taylor and "Director of Growth" Scott Freschet... who was living up to his title as this was his first experience of joining a Twitter EdChat.

Educators - There were educators at every level including Principal, admins, IT Directors and teachers representing every kind of institution, from primary schools all the way through to college and university staff.

EdTech - Batting for the Entrepreneurs were organizations that many educators will be familiar with because they are renowned for the good work and their collaborative cultures they have with educators. This included companies like Boundless Learning, BrainPOP, ClassDojo, Launchpad Toys, Remind101 & Zombie-Based Learning.

We even had a policy maker, Alison Hall from the Jamaican Ministry of Education.  There were even people from the press who checked the chat out with Clara Galan tuning in... fortunately there were no scandals or Edu/EdTech Twitter bustups... just a meeting of minds coming together to discuss collaboration with great EdTech.

To give you a flavour of this meeting of minds I have included a selection of Tweets from educators & edtech entrepreneurs throughout this post.

#EdChat Diversity
As you may have noticed William Jenkins has been helping to spread the word about this session and has blogged about #EdTechBridge to make people aware of the session.


In a recent post "The Greenwich Village of EdTech" he discusses what online education and EdTech communities could learn from Jane Jacobs diverse city spaces. This article is worth a look and highlights quite well why are so delighted with this turnout.

William attends a number of EdChats and I wanted to find out his experiences of being on the entrepreneur side of the fence and discovered that he's done quite a bit of research with this. 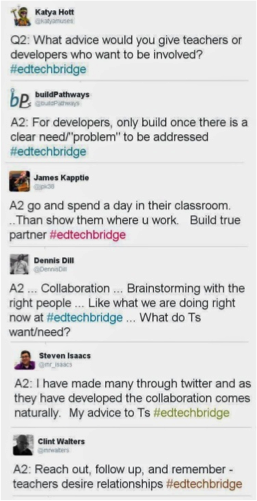 Here are some posts which includes some of his experiences and data on Twitter chats and some ideas that he's had as a result of joining EdChats - The Death of an EdTech Salesman, #EdChatModerator, Mining Data and How can we help).

As you can see from these posts the dataset William has compiled includes a list of the accounts of people who have Tweeted using the 150+ EdChats and conferences that he was a aware of at the time (21st Apr-10th June).

The intention was to create an online directory so people could see whose chatting, where they are based, age groups and subject areas they teach etc. One reason for trawling through this data is related to what #EdTechBridge session is trying to do, and what Jane Jacobs advocates... because he wanted to assess how diverse the audience of #EdChat participants tends to be.

Obviously peoples' profile information is included in their Twitter bio, but it sure would take a bit of time to go through over 26,000 Twitter accounts... and that's only for a 6 week period! If you wanted to help William out with this and crowdsource the work please feel free to fill out the survey on the following link; Twitter EdChat Directory

In Sync but Out of Time
We think the turn out for our first session was really encouraging and look forward to building on this first session. We might have had more people attend the session if it were not for the issue of time zones.  We do plan to add another time slot to accommodate other time zones.  Please be patient as that might take us a little time.

It's great to see that #EdTechBridge has some international appeal but there were Tweets on the hashtag from people would said that they would like to attend, but the time wasn't good for them. After all it's 2am in Israel which has a vibrant EdTech startup community... So a big shout out to the UK night owls William Jenkins, Bryan Mathers, Kriss Baird and Immerse Learning.  Thank you for staying up with us! 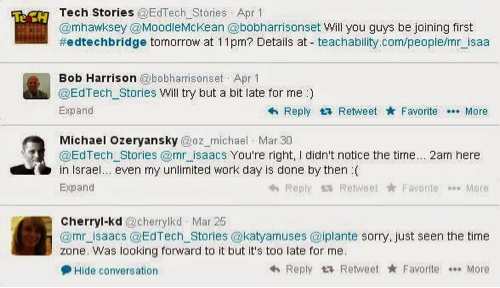 When discussing this issues with Katya she did what entrepreneurs do very well... she turned a problem into an opportunity…

"Why not allow the discussion to continue throughout the week so that people from other time zones could still get involved? All that would be needed to make this happen is for the questions to be readily available throughout the week, then for people to answer the Tweet in the same way that they do during the chat i.e. #edtechbridge A1, A2, A3 etc. This would also mean that people who did attend the chat could contribute to the discussion"

What a great idea! Let's keep the discussion going all week, as well as enabling people who attend "live" they will be able to engage with educators and EdTech in other time zones... And even for people who do turn up for the "live" show sometimes an hour just isn't enough!  For those interested, here's a link to a blog post highlighting this week's chat.  Feel free to comment directly in the post or on twitter with the #edtechbridge hashtag.

But as the same time... Twitter isn't for everyone, and we don't want #EdTechBridge to be missing an extremely important, but often neglected voice in any EdTech discussions

As Tech enthusiasts we know that the best technology in the classroom are tools that everyone can use so... the views and voice of all educators is important to us.

Therefore each week we have decided that we will make the archives available so people who are not on Twitter can access them. In addition to this we will also provide a private forum for people to contribute to the discussion. Please find this on the following link; #Edtechbridge - Not on Twitter?

We are providing the questions in this format in the hope that anyone who is unfamiliar with Twitter, or who would rather not make their views public, can still contribute to the discussion... we want to hear from the Tech detractors because it's only through listening to, and finding solutions to any issues you have that we will be able to co-create truly great EdTech.

Posted by Games and Learning at 4:29 PM